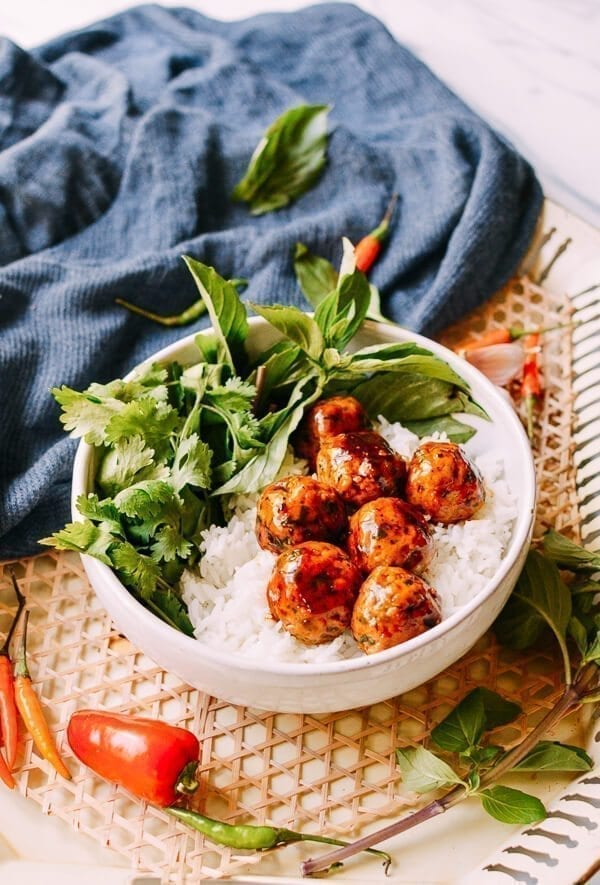 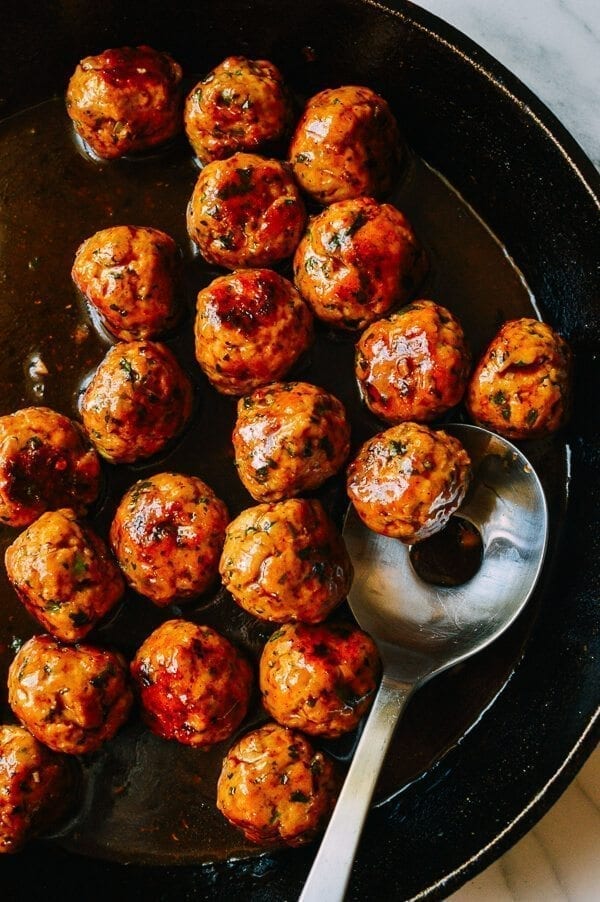 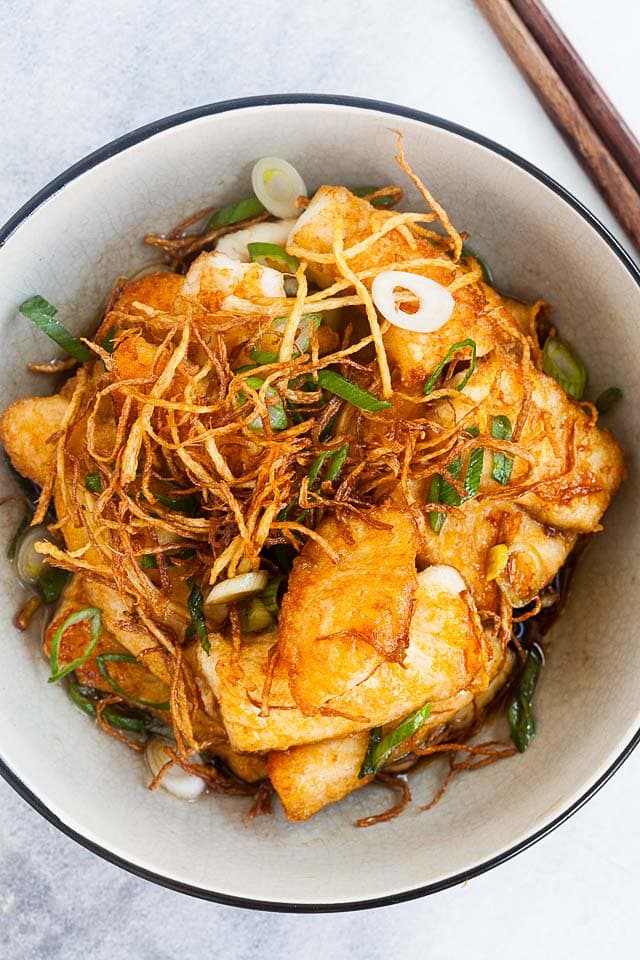 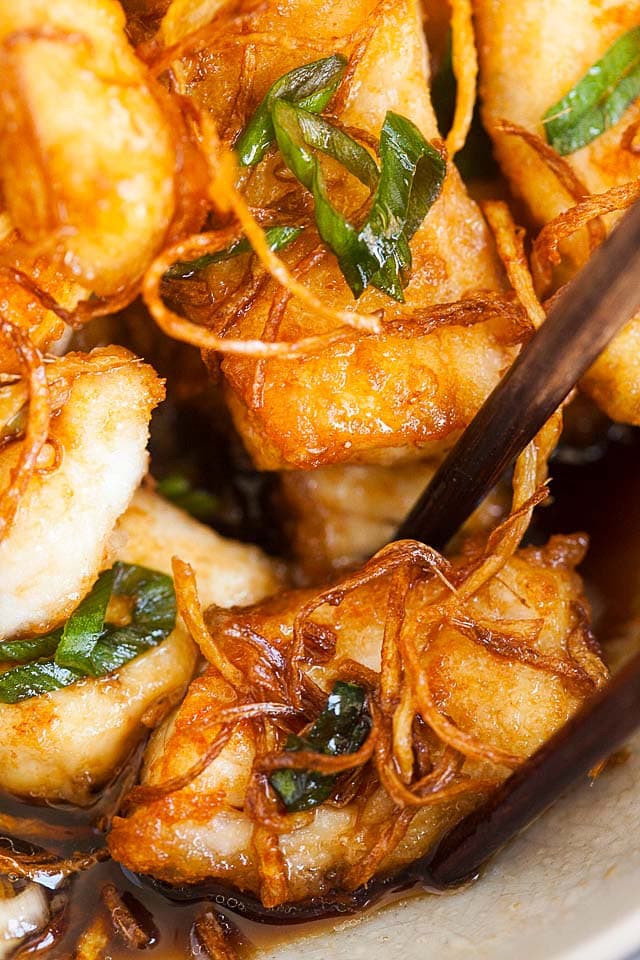 Another classic dish at Chinese restaurants is egg drop soup! This is a super simple soup where a egg is poured into simmering chicken broth in a thin stream the cooks into smooth ribbons that gives the soup an amazing creamy texture. 156 more words

With egg ribbons, tofu and shitake mushrooms, this is a deliciously warming veggie soup

Today I have a quick, easy and super tasty recipe for sticky honey sriracha chicken bites! This is an Asian style dish where chicken is coated in panko bread crumbs, fried until lightly golden brown and crispy before being tossed in a sweet and spicy sauce. It takes less than 20 minutes to make this…

This honey walnut shrimp is one of my favourite recipes and when I made it recently I thought that I would take the opportunity to update the recipe and photos which I originally shared back in 2009! Honey walnut shrimp is a simple dish with crispy coated shrimp in honey, sweetened condensed milk and mayonnaise…

😊😊 Have a nice 👍🏻 and nutritious bowl of soup to keep you nourished when the weather is getting colder.  😁😁

Delicious Hainanese flavoured chicken rice is a very popular dish among the Asian Chinese especially in Singapore and Malaysia.

🍗Hainanese chicken rice is a dish adapted from early Chinese immigrants originally from Hainan province in southern China.  It is considered one of the national dishes of Singapore.

🍗Hainanese chicken rice is most commonly associated with Singaporean, Malaysian and Hainanese cuisines, although it is also popular in Thailand and Vietnam. It is based on a well-known Hainanese dish called Wenchang chicken (文昌雞), due to its adoption by the Hainanese overseas Chinese population in the Nanyang area (present-day Southeast Asia). Catherine Ling of CNN describes Hainanese chicken rice as one of the “40 Singapore foods we can’t live without”.

🍗It also listed at number 45 on World’s 50 most delicious foods complied by CNN Go in 2011.[4] In Malaysia, as in Singapore, chicken rice is available in many Chinese coffee shops, restaurants and street hawker stalls, and also in chain restaurants such as The Chicken Rice Shop and OldTown White Coffee.

😃The chicken is prepared in accordance with traditional Hainanese methods, which involve poaching the entire chicken at sub-boiling temperatures. The resulting stock is skimmed off and some of the fat and liquid, along with ginger, garlic (and in the case of Singaporean and Malaysian chicken rice, pandan leaves) is used in the cooking of the rice, producing an oily, flavourful rice sometimes known as “oily rice”.

😃In most countries, the dish is served with a dipping sauce of freshly minced red chilli and garlic, usually accompanied with dark soy sauce and freshly ground ginger. Fresh cucumber boiled in the chicken broth and light soy sauce with a dash of sesame oil are served with the chicken, which is usually served at room temperature. Many stalls, especially in Singapore or Malaysia, now offer deboned chicken.

🤓🤓Chinese rojak are favourite among the locals in parts of Asian countries.  It’s sweet and sour flavours, combined with the crispiness of the you tiao (fried dough fritters) and tau pok (grilled beancurd). The prawn paste, when mixed with the dish, makes it oh so yummy!   This recipe consists of cutting up pineapple, mango, cucumbers, bean sprouts, apples, tau pok and you tiao, and toss them with the sauce, topped up by crunchy peanuts.